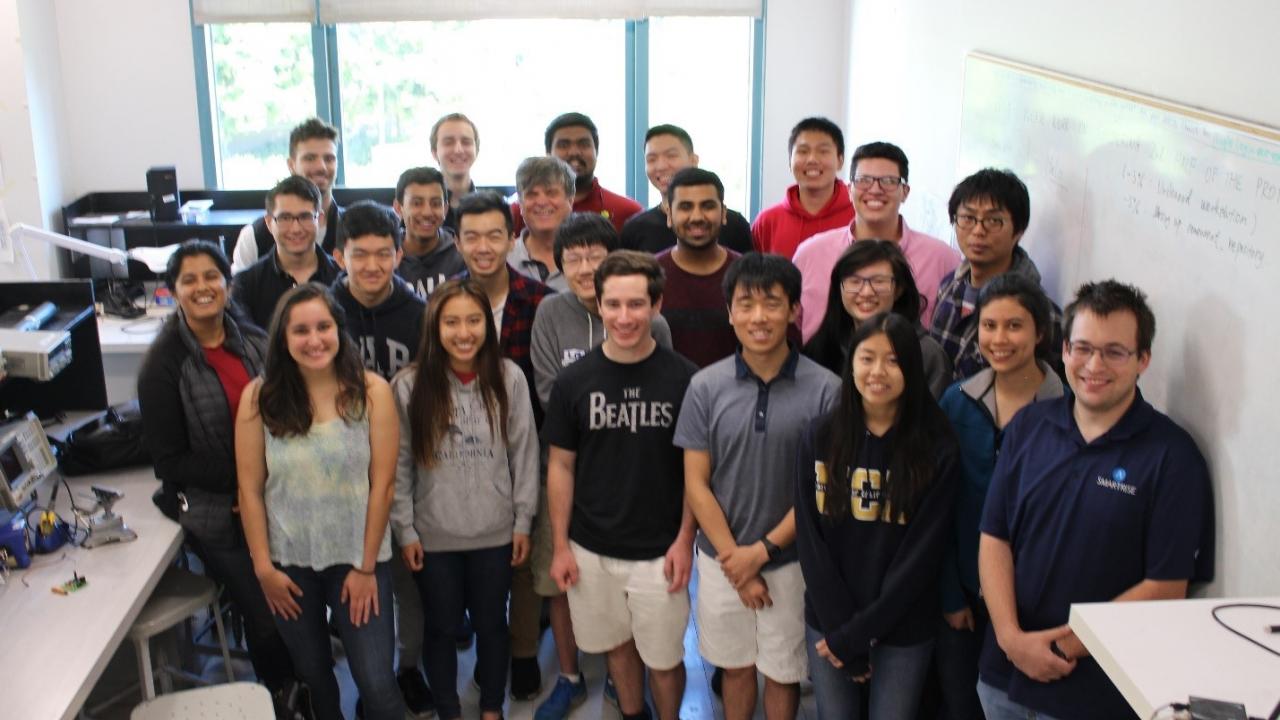 Texas Instruments, a global leader in semiconductor and integrated circuit technologies, recently awarded $40,000 to the UC Davis College of Engineering’s Department of Electrical and Computer Engineering to support scholarships and hands-on engineering curriculum in the department. This is the seventh year the company has invested in the College of Engineering.

The recipients of the 2018 Texas Instruments scholarships are:

“EE-Emerge allows engineering students to use their creativity to conceive projects demonstrating how electronic systems are interacting with humans,” Knoesen explains. “The EE-Emerge students learn how to implement electronic systems in practice, to work in groups and to communicate their projects to the general public. I also enjoy interacting with the students during their critical junior year by offering professional and academic advice.”

EE-Emerge students conceive, design, and build interactive electronic systems while learning to work in student groups and practicing how to communicate their projects to the public.

Two of the 2018 TI Scholars, Maksim Nedorezov and Veronica Contreras, participated in EE-Emerge during the 2017-18 school year.

Maksim Nedorezov is a third year student studying computer science and engineering. Because his grandfather is an electrical engineer, Nedorezov says he grew up around different types of electronic kits, which sparked his interest in engineering at a young age. By the time he was seven years old, he had learned to solder.

“Being an engineer is basically in my blood,” Nedorezov said.

As a TI scholar recipient, Nedorezov is thankful for the opportunity to focus his energy towards his education instead of worrying about money.

Not only is he proud of the final product because they used components used in the original Theremin instruments, but they were also able to accomplish something their professor said will be very challenging to pull off. Nedorezov’s love for making and understanding how things work around him has driven him to put in hard work to accomplish amazing things.

Nedorezov said being pushed to have concrete details decided by a specific deadline helped the group “stay on their toes” to complete a functioning deliverable on time.

Last year, scholar recipients and EE-Emerge participants Veronica Contreras and William Gentry were on a four-person team that developed a three-dimensional Tic-Tac-Toe game. Contreras’ team transformed the traditional two-person game by making a large cube made of 26 smaller cubes to create a 3D Tic-Tac-Toe.

When assembling the 3D Tic-Tac-Toe, her team worked on the 3D printing, soldering connections for the microcontrollers, and preparing wire mesh for capacitive touch sensors. Contreras was responsible for the communication between the 26 microcontrollers. She is proud of the project itself but even more proud of how well the team worked together to create an amazing product.

“I wanted to be challenged in a way I had never been challenged before,” Contreras said when asked why she chose to pursue electrical engineering. Contreras says she learned valuable skills from the EE-Emerge program and has gained more confidence to continue her pursuit of an engineering degree. Contreras has also worked with Texas Instruments as a researcher and through her role as an officer for the UC Davis Institute of Electrical and Electronics Engineers student chapter.

In addition to funding student scholarships, EE-Emerge, and other student projects, Texas Instruments has provided funding for curriculum development, which is being overseen by electrical and computer engineering faculty Joshua Hihath, Hooman Rashtian and Lance Halstead. Starting this summer, the funding will support graduate and undergraduate students to improve the curriculum in some existing classes and to create new classes. The curriculum development will give students more hands-on experience and connect theory and application during their junior year.

The curriculum changes will also provide students additional background in the field of power electronics, which could open the option for them to pursue a career in this field. Specific developments include the addition of labs, a new programming class for electrical engineers, and the use of Texas Instruments’ Robotics System Learning Kit and Power Management Lab Kits for design classes and laboratory experiments.

“We are proud to sponsor the TI Scholarships and EE curriculum at UC Davis,” said John Parry, a systems engineering manager at Texas Instruments. “We believe the hands-on approach that Professor Knoesen and his colleagues have emphasized in the EE Emerge Program strengthens students’ problem-solving and presentation skills. These skills are critical at Texas Instruments and throughout our industry.”

February 26: Mark Your Calendar for Our First UC Davis ECExpo